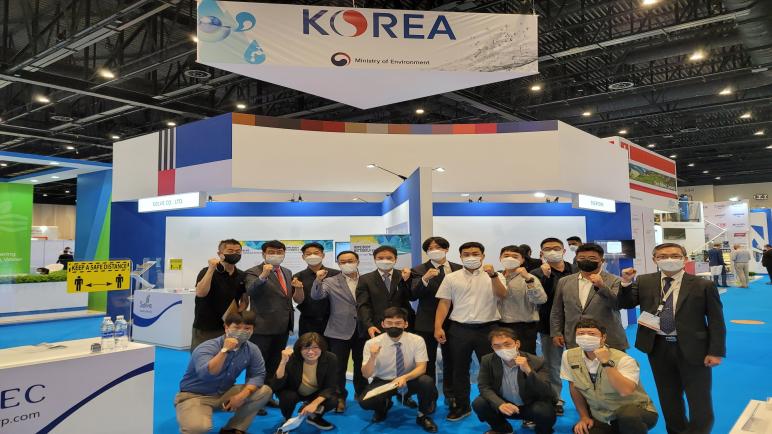 Dubai, UAE, 15 September 2022: The Water, Energy, Technology and Environment Exhibition (WETEX) and Dubai Solar Show (DSS) annually attracts major South Korean companies specialising in water and renewable energy. These companies view the exhibition as an ideal platform to showcase the leading Korean experience in this field and consider the event a great platform to establish new partnerships in promising markets in the region and the UAE.

Dubai Electricity and Water Authority (DEWA) is organising the 24th WETEX and DSS under the directives of HH Sheikh Mohammed bin Rashid Al Maktoum, Vice President and Prime Minister of the UAE and Ruler of Dubai, and under the patronage of HH Sheikh Ahmed bin Saeed Al Maktoum, Chairman of the Dubai Supreme Council of Energy, from 27 to 29 September 2022 at the Dubai World Trade Centre. The annual exhibition witnesses a large turnout of major regional and global companies to promote their innovative products, services and technologies in energy, water, sustainability, green technologies, renewable and clean energy, green buildings, smart grids, electric vehicles and other vital sectors.

HE Saeed Mohammed Al Tayer, MD & CEO of DEWA, Founder and Chairman of WETEX and DSS, highlighted the importance of the exhibition in consolidating cooperation between the UAE and South Korea to transition to a green economy, and support innovative solutions that contribute to mitigating climate change. This is in line with the goals of the UAE and Dubai to be a hub for exporting and re-exporting green products and technologies. Al Tayer noted that the partnerships between the two parties are premised upon several areas of clean energy, the most important of which is low carbon hydrogen, which supports the UAE’s efforts to produce competitive hydrogen. The UAE is targeting 25% of the share of the low-carbon hydrogen market, which is expected to amount to more than USD 400 billion.

“WETEX and DSS keeps pace with global trends and the growing interest in clean and renewable energy sources to produce energy and invest in this vital sector. As the largest exhibition of its kind in the region and one of the most prominent specialist international exhibitions, WETEX and DSS plays a fundamental role in transforming Dubai into a centre of excellence in essential new technologies to achieve zero carbon emissions and reach 100% of clean energy by 2050. Dubai has made great strides towards achieving the Dubai Clean Energy Strategy 2050 and the Dubai Net Zero Carbon Emissions Strategy 2050. In Dubai, we have various world-class projects in clean and renewable energy, the most important of which is the Mohammed bin Rashid Al Maktoum Solar Park, the largest single-site solar park in the world with a planned capacity of 5,000 megawatts by 2030. We also have the Green Hydrogen project, implemented by DEWA, in collaboration with Expo 2020 Dubai and Siemens Energy at the Solar Park. It is the first of its kind in the Middle East and North Africa to produce hydrogen using solar power. The pilot plant, which spreads over 10,000 square metres, was designed and built to accommodate future applications and testing facilities for different hydrogen uses, including energy generation and transportation,” added Al Tayer.

Over its past 23 editions, WETEX and DSS witnessed the participation of 3 Korean supporting organisations and 11 South Korean companies. Korea Water Partnership (KWP) leads the Korean Pavilion in this exhibition.

“Korean companies were able to achieve fine results through participation in WETEX and DSS 2021, and we expect that various performances will be obtained this year as well,” said Seulgi Kim, Manager of Korea Water Partnership (KWP).