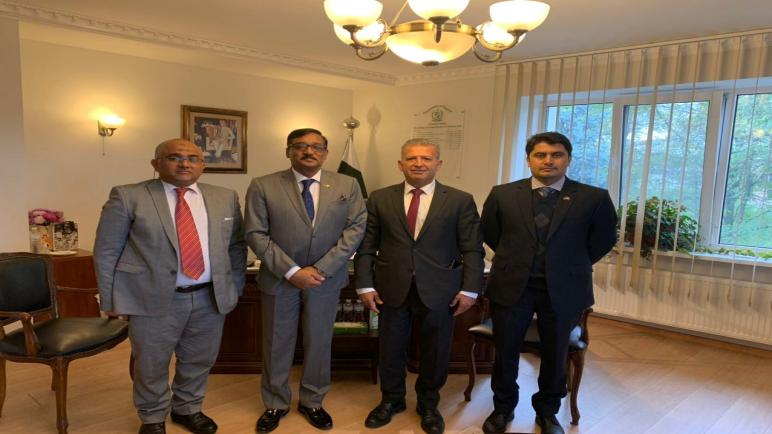 At the beginning of the meeting, the Pakistani Ambassador to Ukraine Noel Khokhar welcomed the President of the Arab-Ukrainian Association of Businessmen and Investors Muhammad Salim Al-Atti, and his accompanying delegation, expressing his great gratitude for the great role played by the association to serve businessmen and investors.

For his part, Al-Atti stressed the importance of strengthening bilateral relations between Ukraine and Pakistan, expressing his readiness to harness all the capabilities that the association possesses to enhance the horizon of economic cooperation between the two countries to serve the business segment.

Al-Ati also expressed his readiness to open the doors of the exhibition organized by the Association in June next year for Pakistani companies, and to introduce the Pakistani economy, which is considered one of the promising economies.

The association’s president and ambassador also discussed many common issues, the most prominent of which was introducing the Pakistani people to the suffering practiced by Russia towards the Crimean Tatars as a result of their occupation of this important part of the Ukrainian lands.

They discussed Pakistani-Arab-Ukrainian relations and talked about trade cooperation between Pakistan and Ukraine, the participation of Pakistani companies in the Ukrainian-Arab International Exhibition and Conference, and preparations for receiving delegations of Pakistani Chambers of Commerce in Kyiv next month.